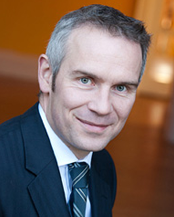 Mr Santini studied at the University of Sheffield where he gained his primary medical qualification (MB ChB). Following his basic surgical training in Sheffield he was awarded his surgical fellowships from the Royal Colleges in both Glasgow and England (FRCSGlasg & FRCSEng). His higher surgical training was gained in the North West region. Subsequently he achieved the specialist fellowship in Trauma and Orthopaedics (FRCS Trauma & Orth) and then won a Royal College travelling fellowship to St Louis, USA.

Mr Santini became a consultant at the Royal Liverpool & Broadgreen University Hospital in 2005 where he specialises in primary and revision knee replacement, knee arthroscopy and hip replacement.

He is the orthopaedic clinical lead in infection control and prevention, having previously had a similar role in clinical audit. He is the lead clinician for the lower limb sub-directorate.

Mr Santini was instrumental in re-designing the then Core Skills Course in Orthopaedics at the Royal College of Surgeons of England. He chairs the organising committee and wrote and edited the accompanying book and DVD. Now under the name Specialist Skills in Orthopaedics, the course is run in five centres across the UK and this year, Mr Santini ran the first international course in Dubai. A similar course is planned for India in 2011.

In 2008, he founded the Grosvenor Orthopaedic Club to promote education and research for hip and knee surgeons in Cheshire and Merseyside. The club meets four times a year and have been joined by a variety of international guest speakers.

He was recently honoured to be appointed as Treasurer of The British Association for Surgery of The Knee (BASK) and takes up his role immediately.