Professor Brownson has recently returned from the 47th Annual Scientific Meeting of the Percivall Pott Club.  The Percivall Pott Club held its inaugural meeting at St Bartholomew’s Hospital on 3rd November 1973 and is named after the famous 18th century London surgeon of that name.

Its members and alumni are formed by doctors who have or who are part of the Pervicall Pott’s surgical rotation which includes St Bartholomew’s Hospital, the Norfolk and Norwich Hospital, the Royal National Orthopaedic Hospital and the Royal London Hospital.

The Club was formed to provide an opportunity for past and present trainees to meet both socially and professionally and an annual meeting forms part of the educational programme.

The images below include the faculty visiting the Royal London Hospital Air Ambulance as part of the first day of the meeting which involved registrar case presentations.  The second photo is Professor Brownson, Professor Chang and Professor Egol with Mr Prim Achan, Orthopaedic Programme Director for the Percivall Pott rotation.

The meeting was held in the spectacular setting of the Ironmongers hall which is a Tudor style and was opened in 1925. 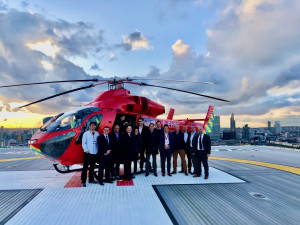 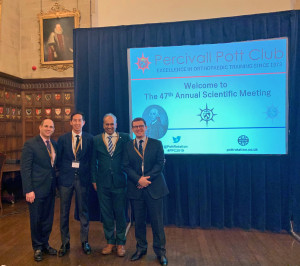